Unpacking the Objects and their Stories. Takeaways from the 2013 AAM Conference. 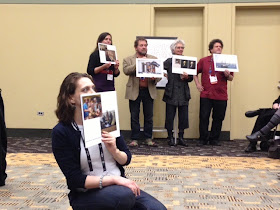 I'm still buzzing a bit from the interplay of people and ideas (and crabcakes!) that I found in Baltimore during the 2013 American Alliance of Museums (AAM) Annual Meeting.

Normally I ignore the theme of most museum conferences, but this year's AAM theme, The Power of Story, resonated with me because of two particular sessions that bookended my experiences at the conference, and that have continued to make me think deeply about those two essential elements that great museum experiences provide: stories and stuff.

The first session, "Is it real? Who cares?" delved into the interplay between whether an object is perceived as "real" or "fake" and whether that notion has any impact whatsoever on whether a visitor's experience(s) with that object are successful or not.

During the session, different objects were described and projected onto a large screen at the front of the room.  Examples of objects included things like "Sue" the T Rex, the historic ship U.S.S. Constitution, or a recreation of a historic synagogue ceiling.

At the same time, members of the audience were given smaller images of the same objects mounted on foamcore and were asked to weigh in on whether the object/story was more toward the "Fake" or "Real" end of the spectrum, and more toward the "Works" or "Doesn't Work" end of the spectrum, in terms of visitor engagement.  After each person holding an image weighed in on their impressions of the Fake/Real and Works/Doesn't Work continuum at the microphone, they went to stand at the front of the room and serve as a data point in a big 3D matrix.  (The front wall of the room was the Fake/Real axis, while the side walls were the Works/Doesn't Work axis.)

It was Uber Museum Geeky, but also lots of fun, especially once everyone was standing at the front holding their images and people from the audience could comment and move the human "data points" around to refine the big 3D matrix of stories and stuff.  (See image from the session at the top of this post --- that's me holding the U.S.S. Constitution firmly in the Real/Works quadrant.)

One thing that struck me was that at the beginning of filling in the matrix things were really clumped up toward the Fake/Doesn't Work part of the matrix, but after continued discussion, things spread more evenly between Fake and Real, and much more toward the Works for visitors end of the spectrum.

It really made me think how often in the museum world that we fetishize objects and their "authenticity" while sacrificing the primary visitor experience(s).

The organizers of this session created a "Is it real? Who cares?" Tumblr site that they used while preparing their session, but which they have also opened up to continued conversation amongst colleagues on the topics that came out in the session discussion.

The other session that really stood out for me (and that connected in so many ways to the Is it real? session) was a dialogue between Elizabeth Merritt, founding director of the Center for the Future of Museums, and Rob Walker, one of the creators of the Significant Objects Project.  The session was entitled (unsurprisingly) "Significant Objects."

Walker started with a brief presentation about the idea behind Significant Objects, which I would summarize as a way to test the theory that an object (of fairly limited "value" like something you could buy at a garage sale) could be invested with significance by attaching a fictitious story to it.

Some of the stories for the first 100 Significant Objects were written by famous authors (like Jonathan Lethem and Bruce Sterling) while other "object stories" were written by less famous writers.  In the end, all of the objects + stories were put up for sale on EBay to determine whether people would pay more for these objects coupled to clearly fictional stories than they would for the objects by themselves.  It turns out that people did pay more for the objects with stories, but really you should check out the entire Significant Objects website to get a better sense of the entire scope of the project.

In the same way I usually don't pay attention to conference themes, I've rarely purchased recordings of conference sessions, but in this case I'm making an exception just because I found the conversations and references presented (especially by Merritt and Walker) so valuable and meaty.  Two in particular related to this thread of narrative and object include the book "Taking Things Seriously" written by Significant Objects co-creator Joshua Glenn, and the Museum of Broken Relationships.

You can go to this section of the AAM website to purchase recordings of conference sessions, including this "Significant Objects" session which happened at 10:15 a.m. on Tuesday, May 22nd.

As I departed Baltimore, I was left with the overwhelming feeling of the importance of objects in museums and visitor experiences, but only when coupled with strong narrative contexts, not as ends unto themselves. And that's really The Power of Story.

P.S. If you receive ExhibiTricks via email (or Facebook or LinkedIn) you will need to click HERE to go to the main ExhibiTricks page to make comments or view multimedia features (like videos!)
POW! (Paul Orselli Workshop, Inc.) at 4:01 PM No comments:
Share
‹
›
Home
View web version