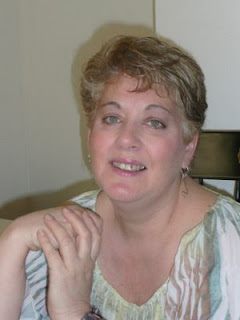 Lynne Friman is the Principal at Envisions Design, Ltd. 27 years ago, she began her museum career in New York City. Lynne moved from NYC to Detroit to Head the Exhibition and Design Department for the Detroit Historical Museums. After several years there, she moved to The Henry Ford Museum. While at The Henry Ford, Lynne held several positions including Head of Design and Production, Creative Visual Services, Facility Development and Senior Experience Designer. Lynne has also served as the President of NAME (the National Association for Museum Exhibition).

Recently, Lynne was kind enough to respond to a few questions from ExhibiTricks:

What’s your educational background?
I have a BFA in graphic design and illustration from University of Illinois. I interned through Parsons School of Design and then took post-grad courses in industrial design, while working for an architect. But most of my direct museum education was through apprenticeship… learning from Architect Adam Tihany and former Metropolitan Museum of Art Designer, Lucian Leone.

What got you interested in Museums?
It was never a career path I directly pursued, but I’d grown up in the Chicago area going to all of the great ones there --- loving the Field, Shedd and the Museum of Science and Industry. The Chicago Museum of Contemporary Art was a favorite because it was so fanciful. In Junior High I was labeled an “alternative learner” and put into a program called the “Floating Classroom.” We learned by going out to places rather than reading about them. I remember a project at the Art Institute where we selected an artist and created projects around their work based in science, math, social studies and literature. I chose Calder and learned so much about the world.

What are some of your favorite museums or exhibitions?
The most moving exhibition that I recall was going to the “Sixth Floor” exhibit in Dallas during AAM with a small group of museum designers. By the end we were all teary eyed and moved beyond words. It was a well done exhibit, but the most important thing was that designers, Staples and Charles, allowed the sense of place to really be the star… that was the most important artifact and it was honored. I stood at the window and looked out at the grassy knoll, it was very emotional.

Recently I went to Ottawa to the Museum de la Civilization. I’d heard about John Jacque Andre’s installations for years and seen other attempt his style elsewhere, to less affect. On one level it was a time capsule for 1980s exhibit design, but it held up. The interpretives were good hands-on/ minds-on and there was much to be engaged with. For some reason, I was really taken with the lighting in the village on the 3rd floor. I’ve been through lots of museums with pseudo villages, but the mood it evoked made us want to explore every nook and cranny (and there were lots).

Tell us a little bit about the "reinvention" of the DIA and your role in that?
I started work on the DIA in 2001, designing a couple of exhibits as the museum moved the collections around to work on the facility. Then I was hired as project manager for the reinstallation project. Early on I facilitated teams of curators, and other staff to organize their thoughts around their big ideas.

My job really was to keep the process flowing with my Excel spreadsheets, listing all the parts and my Microsoft project charts, telling me where we were and where we needed to go. I went to San Francisco and was trained as a facilitator at Interaction Associates. I coordinated the teams and the production of all the cases, graphics and more. I also was involved in the hiring of approximately 15 different design and production firms.

The reinvention of the DIA is really focused on reinterpreting the collection—grouping things differently, telling stories where previously there had only been the most basic information. Using high tech interpretives was done sparingly, I think to great effect. The most talked about one is the “dining table” where you sit down at a table and have an 18th century French “meal”, using the serving pieces that surround you in the gallery. It was a subtle contextualization that gave the static pieces some life. There are simple “eye spy” devices in the galleries for children, but we know the adults use them just as much.

Why do (as a generalization) history museums and art museums seem so resistant to interactive exhibits?
I don’t think history museums are resistant to interactive exhibits. 10 or 15 years ago when I was really focusing on history exhibitions we were trying to learn (sometimes steal or borrow) everything we could from science and technology museums and make it relevant to historic content. History museums have come a long way to bringing interactivity to museums. Soon I will embark on a project where the goal of the project is hands-on and minds-on learning. Not always at the same time, but balanced throughout the site.

Art museums may be a tad more resistant to interactivity. But then it depends on what you mean by the word interactivity. Art museums very much want visitors to have an interactive experience with the art they display. However, their goals are different from other museums. There is a certain level of contextualization that I have yet to see in an art museum.

We pushed the envelope at the Detroit Institute of Arts, in developing high tech, low techs and no tech interactives. There are dozens throughout the museum, perhaps 2-5 in each gallery. Some people feel that is too much, many visitors still want an unmediated experience where you can just experience the art. But we found through audience research that the average visitor needed a little help in order to appreciate the art. Anecdotally, people who have little art museum experience feel the interpretives are helpful.

What are some of best/favorite examples of interactivity in history and art museums?
At the ROM (Royal Ontario Museum) there used to be an exhibit called “Planet Earth.” It won the exhibition competition several years ago. You sat in a volcano and experienced the evolution of the earth. My young son was fascinated and so was I. We both learned a lot—it was a cool environment that was done very well.

I really enjoy the dining table at the DIA, that I mentioned earlier. It is designed by Pentagram Associates. The experience is engaging, it gets people talking and sometimes they even connect to the art around them. While I enjoy this, I’ve also heard other people describe this as soulless, with little connection to the art. But for me, it draws you in and meets the goals and big idea for that area.

The other interepretive that I like very much, at the DIA, is a simple set of flip panel that sits in front of 5 Picasso paintings of women. The panel shows you photographs of 5 women. It asks you to pair the “real” images with Picassos. It is about looking through Picasso’s lenses. It gave me a nice little aha moment.

Can you talk a little about some of your current projects?
I am deeply in the midst of installing the University of Michigan Museum of Art, set to open in March 2009. This museum has a very different audience and mission from the DIA but is also working towards a greater level of interactivity. As I am installing right now, ask me more in a few months!

In addition to the museum projects, I have been working on a Master Plan for my regional arts alliance. I am also Chair of the local Arts Council. These are labors of love that connect me to my own artistic roots.

How do you think museums will be different 10 years from now?
I can’t hazard a guess. 10 years ago I thought they would all be a lot more hands on than they are. Then again, it is in funny quiet moments that I often make the most connections when I visit a museum. But it is often some contextualization or interpretive device that allows me to make the leap.

What technologies/techniques do you think are underutilized currently in museums?
I think the use of technologies are working their way into all areas of our museums. I don’t think they are underutilized. They often cost a lot, so sometimes they are the early cut in a project.
It isn’t for lack of conceptualizing. Fortunately there are a lot of ways to get an idea across.

If money were no object, what would your “dream” exhibit project be?
Object theatre, creating environments that bring art, culture and history together in one place. Sometimes museums are so defined by their typology that there are things that you “can’t” do in one place or another. I like to break rules to create new relationships between artifacts and the visitor.


Thanks to Lynne for taking the time to share her thoughts with the ExhibiTricks readers!


Don't miss out on any ExhibiTricks posts! It's easy to subscribe right now via email or your favorite news reader. Just click the "subscribe" link on the right side of the blog.