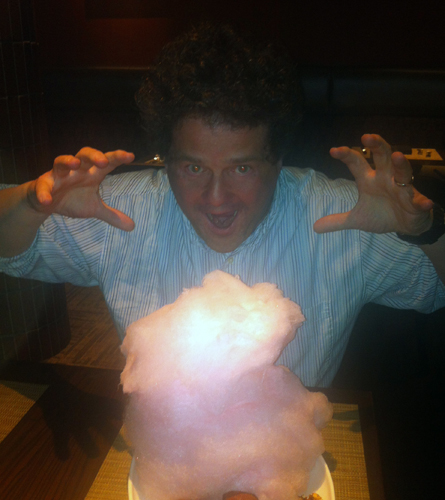 First off, kudos to the Association of Children's Museum (ACM) staff and the staff of the Children's Museum of Pittsburgh for pulling off such an audacious event in such a graceful way.  The Children's Museum looked great (all spiffed up for the out of town company!) and if there is ever a Nobel prize awarded for museum directors, I would definitely put Jane Werner on the short list.

The organizational format of this year's conference was a little different than normal --- folks from outside the traditional bounds of the Children's Museum field presented to us, and helped us to rethink, and yes reimagine a bit.

However, I only found part of this reimagining exercise successful.

The first part of the reimagining happened on the first day of the conference when ALL of us marched over to the Byham Theater to engage in something called "Small Talks."  I have to admit, I was a little apprehensive at first --- we're ALL going to be in this same theater, ALL DAY, watching/listening to the SAME presenters?!?!?   I felt a little trapped.  But I gave it a try.

Having the speakers and performers present to us at the Byham was like what it must be like to attend a TED Conference.  The speakers were thoughtful, the performers engaging, and I really felt inspired and able to "reimagine" a bit.

Some particular speakers whose work and presentations resonated with me included:

Frans Johansson  spoke about the differences between "strategy" and "serendipity" and how we need to be open and prepared to exercise both of those skills in our professional and personal lives.

Jesse Schell, who in his "day job" designs video games and is a professor at Carnegie Mellon University, entertained us with his circus skills.

Vanessa German is a passionate artist committed to working with her community in many different ways. (Plus her spoken word piece to end the day kicked butt!)

So that was all good. Great first day, lots of good conversations with people about the presenters and the ideas in their presentations.

The next day was a traditional conference day, but the culminating session of the InterActivity Conference was the "Reimagining Design Seminar" on Thursday afternoon.  I'll just state upfront that this particular aspect of the reimagining theme left me cold, and completely befuddled.  The premise is/was that four international and interdisciplinary teams of designers would present their models for realizing the "21st Century Children's Museum."

I could barely sit still in my seat because of how agitated these presentations made me feel.  It was like bad performance art.  I kept thinking "how much money was spent on all of this?!?"  Perhaps the idea was to push people out of their comfort zone, but honestly my only takeaway was "what the heck was that all supposed to be about?"  A children's museum could be like a sponge? Puh-leeze!

I'm sorry to be so negative about something that sincere people obviously spent a great deal of time on, but that's my honest reaction.   (I'd gratefully provide space, and equal time, on this blog for someone more deeply involved in the process to present what it really was about.)

So, in sum, I learned from InterActivity 2013 that reimagining is NOT a straightforward business.  Perhaps we all just need to pick and choose from the things that do (and do not!) resonate with us, and use these ideas and people and experiences to sharpen our own professional practice.

Were you at InterActivity 2013?  If so, what were you takeaways?  Let us know in the "Comments" Section below this post.