Tinkering Is Like Breathing: An Interview with Dana Schloss 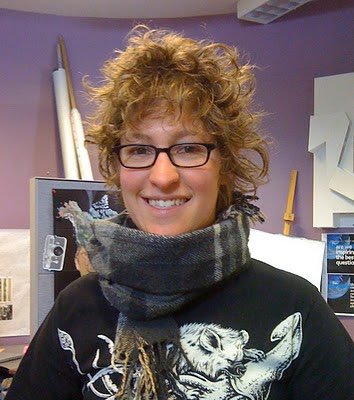 Dana Schloss is a self-described enthusiastic and curious museum nerd. She has worked as an exhibit designer and prototyper at Quatrefoil Associates, where she designed and built exhibits for history, science and children's museums. Years of freelancing and interning have given her a broad view of exhibits at many museums, including the Science Museum of Minnesota, The Franklin Institute, The Mutter Museum, The American Philosophical Society, New York Hall of Science and The Children's Museum of Manhattan. Dana also worked as a Museum Educator at the Museum of the Moving Image in Astoria, NY.  She is a graduate of the University of the Arts program in Museum Exhibition Planning and Design. She is currently developing exhibits for the New Science Centre Project 2011 in Calgary, Alberta.

Dana was kind enough to respond to a few ExhibiTricks questions:

What’s your educational background?
I went to Sarah Lawerence College, an interdisciplinary school without majors. I ended up figuring out that what I am really interested in is how people understand science and making art about science, so I mostly took classes in science and animation. I made several animations about the history of science, mostly diseases. In my last year, my puppet teacher pointed out that my work was essentially museum exhibits filled with puppets and that I should think about getting paid for that.

What got you interested in Museums?
I spent a few years in New York building animated holiday window displays for department stores like Macy’s and Sak’s before I started building stuff for museums.  After fabricating and installing things for museums for a while and being an educator at the Museum of the Moving Image,  I went back to school in the Museum Exhibition Planning and Design program at the University of the Arts in Philly.

How does working with teams to create exhibits inform your design process?
Well, I love working on good teams. I know what I’m good at and I really like collaborating with people I can learn from and who bring new ideas.

I think one of my strengths--and weaknesses--is how comfortable I am with criticism.  I am pretty hard on myself and pretty hard on the science center field, which can be hard for some teams to take. I'm working on being less of a perfectionist and trying to understand that some people don't hear sentiments like, "that sucks less so much than it did yesterday!" as a positive comment.

Tell us a little bit about how your tinkering informs your exhibit design work?
This question is almost impossible to answer. Tinkering is like breathing. I take things apart at meetings and build with my food at meals. It's hard for me to make a distinction between tinkering for work, tinkering for play, and tinkering because it's just who I am.

Part of the excitement of prototyping is that it reveals visitors' ideas and interests. Being authentically responsive means I get to tinker with ideas and evolve exhibits until they fit visitors' needs or they fall apart.


What are some of your favorite online (or offline!) resources for people interested in finding out more about exhibition development?
I steal a lot of ideas from Make Magazine, Instructables, and maker blogs. I also get a lot of ideas from the geeky 12 year old kids that I hang out with while testing exhibits. I spend a most of my free time at the local hacker space and a newly formed local crafting space. Talking to curious and creative people is pretty energizing for me, and I like to steal their ideas, too.

What advice would you have for fellow museum professionals, especially those from smaller museums, in bringing more tinkering into their exhibitions?
Do it. Testing exhibits is way easier than you think it is.  A lot of more traditional interactives can be mocked-up in tape and cardboard. Most computer-based interactives can be tested with paper and pen. Prototyping doesn't have to be expensive; your recycling bins are a goldmine of good prototyping materials.

Testing an exhibit doesn’t have to be formal or serious. Assemble an approximation of the experience you’re planning and see how people interact with it. You can learn a lot just by watching people.

If you're thinking about prototyping, you should listen to Malcolm Gladwell's TED talk about Howard Moskowitz and product testing spaghetti sauce. Basically, Moskowitz upended the way that food companies find out what people want. For years and years companies had used surveys, but Moskowitz had people taste samples--basically, he prototyped spaghetti sauces. As a result, he discovered entire new categories that people wanted. No one had ever responded in that way while filling out a survey, because it's really hard to come up with a new sauce you'd love when you just have a pencil in your hand. But replace the pencil with a fork and you can help people discover that all along they really wanted a chunky spaghetti sauce.

What do you think is the “next frontier” for museums?
I think the next frontier for science centers is more authenticity, more mess, and transactive exhibitions. For natural history museums I think it’s going back to the last frontier --- real stuff, displayed with love.

What are some of your favorite museums or exhibitions?

Favorite Museums: The Mutter Museum in Philadelphia, The City Museum in St. Louis

Favorite science center and children’s museums: Explora and The Children’s Museum of Pittsburgh.

Can you talk a little about some of your current projects?
I am currently absorbed in developing exhibits for the New Science Centre 2011 Project at the Telus World of Science in Calgary. I love it. We're developing a science center that's for playing, being creative and innovating. We're trying to make the exhibits chanegable so that the staff and visitors who use them in the future can easily evolve them for different audiences and different contexts.

It's really fun to get to explore how to create and sustain a new kind of exhibit. It's also really fun to test exhibits so early in the process. (Basically we brainstorm one day, build things the next, and test them on the weekends. Our team screens ideas before we test them but doesn't really evaluate them until afterwords. I love having less conversation and more building.)

Right now, I am coming up for air after piloting testing exbits for our Technology, Style, and Art area, which is a mash-up of art and tech experiences in a teen maker space. In about 6 weeks we quickly tested almost 50 exhibit ideas out of things like cardboard, tape, tubes and Arduinos. Some of these ideas worked really well, some of them will turn into drop-in programs and some of them were terrible and we never want to do them again.

Also, for fun I've been working on a puppet piece about the early days of hot air ballooning and an animation about bats.

If money were no object, what would your “dream” exhibit project be?
Wow, good question. The New Science Centre 2011 project would be pretty high on the list.

I don't think that money is the obstacle to most of the things I want to do, time is really a much bigger hurdle. Time, and the number of places I can be in at once. Other dream projects include a permanent Maker Space/Tinkering School in Philly, where kids, teens, and adults could play and collaborate and build things--from the ridiculous to the innovative--out of junk. Or a storefront museum version of Radio Lab. I’d start with the bacteria exhibit I’ve always wanted to make.

I'd also love to work on more projects for smaller strange museums. I helped a bit on some early design and model-building for the Johnny Eck Museum in Baltimore [a sideshow performer in the 30s and 40s billed as the World's Amazing Half-Boy]. I’ve helped out when at the Mutter Museum when they need me. This kind of work helps me feel grounded in the museum field and so happy to be around old strange collections.


Thanks again to Dana for sharing her thoughts with ExhibiTricks readers!