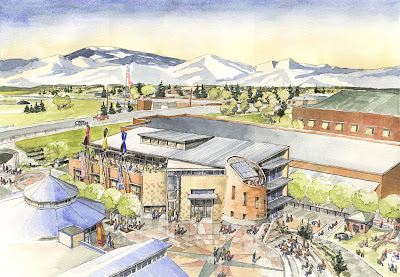 I've just returned from beautiful Helena, Montana where I've been working with the fine folks from ExplorationWorks! (an emerging museum of science and culture) set to open later this Fall of 2007.

Aside from their wonderful community-built "green" building next to the cool Montana-themed Great Northern Carousel downtown, we've been working together over the past few visits to help ExplorationWorks find its unique voice, rather than just replicating things they've seen in other museums.

Which brings me to the topic of perennial favorite exhibit themes for start up museums like "grocery stores" or "mini hospitals." As I've said before, I'd be quite happy never to see another "grocery store" exhibit inside a museum! It's not that I have any problem with these "exhibit chestnuts" per se, but rather the idea that having a mini grocery store is a substitute for doing the real hard and creative work of finding your own "institutional voice." I realize it may be tempting to get the local grocery chain to donate money to outfit a space with kid-sized baskets and bins of plastic fake food, and their logo plastered all over everything (naturally!) but is that really the best possible use of your valuable exhibit space? Personally I'd say you've just created an "entropy exhibit" rather than a grocery store exhibit.

And, don't get me started, on all the amazing learning about nutrition, "cultural diversity" ("we have plastic ethnic food in our store") and the like, that's supposed to occur in these spaces. Little kids like to take things out of containers and pile them up or put them into other containers. PERIOD. I have a toybox in my living room that my daughter Caroline uses for this purpose, but I wouldn't call it an exhibit!

But, getting back to our friends in Helena...I almost had an existential exhibit developer crisis when Suzanne Wilcox, the Director at ExWorks said she wanted to change some things around in our initial design for their Early Childhood Gallery (called "Little Sky Country") and include a mini Post Office and set of stores. HORRORS! Was I going to be forced to give up my strongly held beliefs in the name of making a living? Fortunately not, and I think the resolution we came to in Montana could be useful for other museums considering mini "anythings" in the exhibit galleries.

Mostly we realized that the specific "wrapper" for different exhibit components was not as important as promoting a flexible design architecture that could support the content and desired visitor behaviors such as role-playing, sorting, decision-making, etc. So rather than trying to create a miniature urban "mini Main Street" in the midst of a nature-themed early childhood space, we created a single flexible structure with a Foresty facade whose signage and "props" could be changed and experimented with. (A few initial ideas include "Ma Nature's Cafe" to explore what animals eat, and "The Nest Depot" to discover what sorts of materials animals use to build their homes.)

I'm really excited about what POW! (in collaboration with DCM Fabrication in Brooklyn) has in the "works" for the big ExplorationWorks grand opening of Little Sky Country in late Fall 2007!