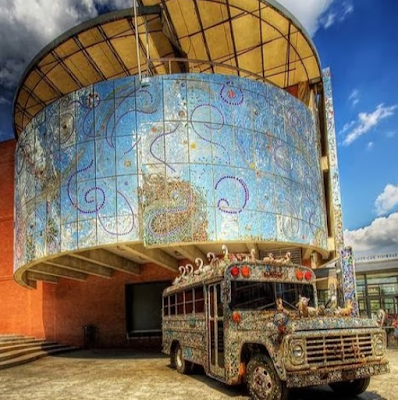 What inspires you?  What pushes you to think about your work in new and different ways?

Given that my recent post about Hayao Miyazaki's Museum Manifesto seemed to resonate with, and inspire, so many ExhibiTricks readers, I thought I would share a similar "manifesto" of sorts, courtesy of the American Vision Art Museum (AVAM) --- one of my very favorite places to visit!

If you are not already familiar with AVAM, it is an art museum located near the Inner Harbor of Baltimore.  The buildings and exhibits pulse with energy and excitement that is infectious, and the majority of the pieces on display were made not by formally-trained artists, but rather an eclectic group of very creative people. To quote from the AVAM website:

"Visionary art as defined for the purposes of the American Visionary Art Museum refers to art produced by self-taught individuals, usually without formal training, whose works arise from an innate personal vision that revels foremost in the creative act itself."

But what I'm interested in sharing today are the Seven Education Goals that guide AVAM.  They strike me as admirable goals for any museum, or any creative person (which really means everybody, doesn't it?)

I hope you continue your week choosing to do something really, really, well!

Posted by POW! (Paul Orselli Workshop, Inc.) at 8:44 AM 0 comments Links to this post 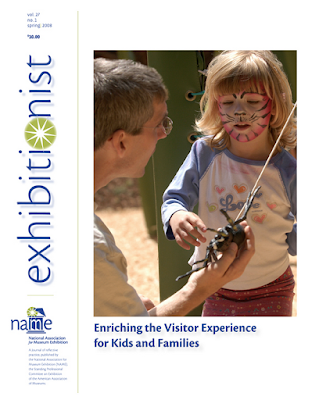 Exhibitionist features thought-provoking articles on exhibition theory and practice, exhibition critiques and commentary, book reviews, technical articles, and other essays of interest to the profession.

As a former board member of NAME, and current columnist for Exhibitionist (check out this free sample of my "Exhibit Newsline" column)  I urge you to help keep yourself informed on what's happening in exhibitions, and in the broader museum field, by subscribing to Exhibitionist !

You can also download free examples of past articles (and in some cases entire past issues!) of Exhibitionist by heading over to the Exhibitionist Online webpage.

You are now able to subscribe to Exhibitionist without being a member of either AAM or NAME.  So what are you waiting for? Click on over to the Exhibitionist subscription page right now!

Don't miss out on any ExhibiTricks posts! It's easy to get updates via email or your favorite news reader. Just click the "Sign up for Free ExhibiTricks Blog Updates" link on the upper right side of the blog.  If you'd like to find out more about working with Paul Orselli, click on over to the POW! Website.

What do websites geared toward Physics Teachers have to do with developing or designing exhibits?

Well, on the surface, nothing!  But I recently bumped into two different physics-oriented websites that I think are worth bookmarking for any museum exhibit designer.

The first site is called Online Tone Generator.  It is a multi-faceted site filled with a variety of audio tools available for testing and/or download.   Some of my favorite apps on the OTG site include the "Hearing Test" which lets you generate different frequency tones to determine the range of your hearing.  (As we age, we tend to lose our ability to hear high frequency sounds.)  Simple and clean, I could easily see adapting "Hearing Test" for exhibit or program demo purposes.

The "Pitch Shifter" tool allows you to change the pitch of audio files (mp3 or wav format), without affecting the tempo. You can also save the pitch shifted files you create.  Again, this tool would be great for creating audio files for an exhibit or program.  So click on over to the Online Tone Generator site to explore the dozen or so FREE audio tools available there.

The other online tool is Physics Teacher James Lincoln's YouTube channel hosting a set of short videos called AAPT Films.   The films break down into sections, with one set called "TRY THIS EXPERIMENT NOW" which are short, punchy videos that let you perform quick (and unusual!) science demonstrations or experiments.

Two of my favorites are the "Eye Poke" video, which let's you recreate one of Sir Isaac Newton's classic experiments involving optics and the human eye.  Another fun one is the "Hear Your Muscles" video (embedded below) which demonstrates a simple techniques that anyone can use to "hear" your own muscles moving or flexing.  Cool stuff!


Speaking of information and inspiration, are there some particularly useful or interesting websites or online resources that you keep in your own Designer's Toolbox?   Please share in the "Comments Section" below!

A little more than a week from now, I'll be doing something I've never done before in my museum career.

I'll be attending an American Association for State and Local History (AASLH) Conference.  (In Louisville, Kentucky.)

It's not that I don't like History Museums, or admire the people who work in them, but my museum "tribes" tend more toward Science Center and Children's Museum folks (and their respective conferences.)

So what prompts me to make this trip to Louisville?  Well, Maker Stuff.  And by "Maker Stuff" I mean the vast worldwide network of MAKE Magazine, and Maker Faires, and the eclectic group of artists, craftspeople, tinkerers, and engineers (amongst others) who get herded under the big umbrella term "Makers."

A few months ago,  I was invited to a meeting of museum folks in Atlanta, and it turns out that many of the other folks in the room were History Museum people. And (me being me) at a certain point I started to berate those nice fellow museum professionals for "completely missing the boat" on the Maker Movement.  It also immediately became clear that many of the people at that meeting had absolutely no idea of what a Maker Faire or MAKE Magazine even were! YIKES!

I mean, what genre of museums is better placed than History Museums to engage people with the stories and stuff behind inventing, designing, building, and manufacturing things?  It's in their institutional DNA!  Not to mention the enormous opportunities for History Museums to tap into new sets of audiences and communities that are deeply engaged in Maker activities that would love to connect with such awesome repositories of the stories and stuff associated with Making.

(Of course this is not to say that there aren't any History Museums plugged into the Maker Movement. The Henry Ford has hosted several Detroit Maker Faires, and The Peabody Essex Museum (PEM) is hosting a workshop later this month called  "What is a Maker Space (and why would I want one in my museum)?")

Shortly after that fateful meeting in Atlanta, Bob Beatty, the COO of AASLH, basically said "OK wise guy, I agree that History Museum folks should know more about the Maker Universe, what can we do about it?"

So I'm off to Louisville to launch something called making/history.  What can making/history be? I'm not really sure yet, but that's part of why I'm going to Louisville --- to meet and talk with a bunch of cool and smart History Museum people to find out.


If you're reading this post, and it resonates at all with you, please help in making/history in any (or all) of the three ways below:

1) Spread the word! (Tweet, Facebook, Email, Phone folks in your networks who can help with this.) I want to help brainstorm and instigate with folks who are interested in connecting more Makers with more History Museums.

2) Meet me in Louisville!  The plan is to let me set up shop in the AASLH Exhibit Hall on Thursday, September 17th.  I'll be doing Maker show-and-tell and giving away free swag, but most of all chatting with more folks to help making/history happen!

3) Add your two cents! Are you already plugged into the Maker Universe, or History Museums, or both?  Share your ideas for ways to increase the connections between Makers and Historians in the "Comments" Section below, or by emailing me directly.


See you in Louisville!


P.S. By an amazingly happy coincidence, Louisville will be hosting a Mini Maker Faire on Saturday, September 19th (the last day of the AASLH Conference --- good timing, or what?) that is FREE and open to the public (including AASLH Conference Attendees --- hint, hint!)