The End of Human Body Exhibitions? 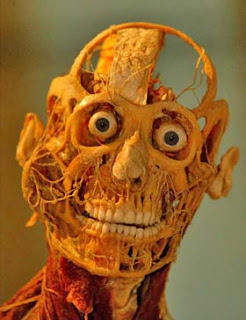 This article from the LA Times reports that the California State Assembly voted 50 to 4 to approve legislation to ensure that the people whose remains are on display consented to be part of such exhibits.

Generally the bodies are dissected and preserved in a process called plastination. "Although plastination was intended to advance medicine and science, many entrepreneurs are using plastination to make outrageous profits by dissecting, mutilating and parading unwilled bodies around the world and in our state," the bill's sponsor, Assemblywoman Fiona Ma (D-San Francisco), said during Assembly debate. "Asking for consent and verification is not too much to ask."

Presumably, the Assembly's concerns arise from allegations that the "provenance" of bodies from China used in some human body exhibitions can not be adequately verified.

Personally, I found the traveling Body Worlds exhibition fascinating, if a little creepy. However, no matter what your feelings about the particular content of certain exhibitions, should governments really be determining whether a museum should present a particular exhibition or not?