Exhibit Inspiration: The Cake Boss is a Great Prototyper! 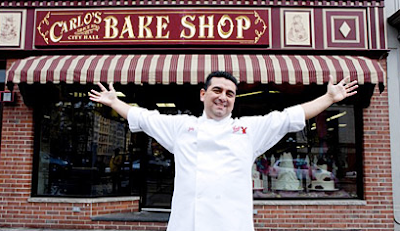 Learning to be a good exhibit prototyper is a lot like learning to be a good swimmer or a good baker.  You could read about any of those skills, but to really catch the nuances and notice the little tricks, it helps to watch somebody else model the techniques a few times before you start out yourself.

So where can you find a TV show with a funny Italian guy on the East Coast to teach you some great prototyping approaches? (No, not me!  But feel free to contact me if you'd like me to run some in-person prototyping workshops or exhibit test sessions with the staff and visitors at your museum.)

No, I was actually thinking of Buddy Valastro, better known as the "Cake Boss" from the cable TV show of the same name.  I'm serious --- this guy is an ace prototyper!

So what are some things you can learn about exhibit prototyping by watching a few episodes of Cake Boss?


1) Know your customer
Before Buddy starts making a specialty cake, he sits down and has a conversation with the client to find out more about the things they like, and to bounce initial ideas around.

Obviously, you won't be having a chat with everyone who comes to your museum, but how can you leverage your museum's social media sites (like Facebook or Twitter) or your newsletter to let visitors know you'll be working on new exhibits, and would like their ideas?  Similarly, asking for help as you test out actual physical prototypes inside the museum is fun and exciting for visitors, and you can learn a lot from the conversations and comments around such prototyping sessions.

2) Prototyping can be a team sport
Usually after some initial sketches and rough ideas about a cake are prepared, Buddy gathers his team to solicit input for things to try, and for which sections of the cake people would like to work on.  Lots of little ideas and input from the bakers and designers result in cool cakes like the "Aquarium Cake" below that includes a real fish-filled tank behind it! 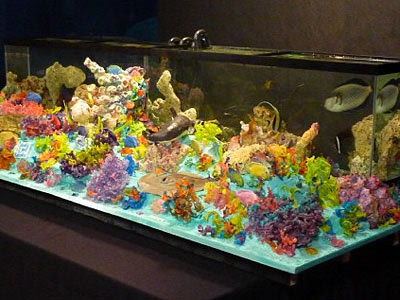 Similarly, when you're putting together ideas and changes for prototype exhibits, give your staff a sense of ownership and pride in the process by soliciting input and showing that even if you haven't incorporated every single idea into the final product, you were willing to sincerely try things out.

3) Stay loose, and keep a good supply of "stuff" nearby
Don't give up on "crazy" ideas --- even if they seem impossible at first.  The Cake Boss crew wanted to make a cake for retired fire fighters.  Once they knew that their intended audience (firefighters) wouldn't be satisfied with just a plain cake, they started talking about fire engines with flashers and a building/cake with smoke billowing out.  That's great, but how do you do it?   Buddy sent somebody out to buy some toy fire engines and a theatrical smoke machine to create the finished cake. (He stripped out all the electronics from the toy and incorporated them into an edible fire truck cake.)

To be able to realize the exhibit equivalent of a "Fire Engine Cake" be willing to throw some crazy ideas against the wall to see what sticks.  But to prototype those wacky ideas it helps to have some simple building stuff (masking tape, paper, cardboard, markers, etc.) handy so you don't lose the enthusiasm and momentum of the moment.

4) Sometimes you drop the cake

Occasionally, something catastrophic (cakeastrophic?) happens on the Cake Boss show. Somebody drops a finished cake down a flight of stairs.  Someone else delivers the wrong wedding cake.  Yes, there may be some yelling, but after everyone calms down they take a deep breath and figure out how to solve the problem.

Sometimes, try as you might,  a favorite exhibit idea is a flat out bust.  Or you follow an idea into a dead end.  Fuhgedaboutit!  There will be prototyping flubs, and exhibit mistakes.  Admit up-front that there will be unexpected challenges to resolve.  That's part of the fun (but leave some time and money in your budget for remediation...)


Now I hope I've inspired you to watch a little Cake Boss and to do a little more prototyping in your museum.  Hey! Maybe TLC should start a new show --- Exhibit Boss!