Like Compost for the Creativity Plant: An Interview with Jason Jay Stevens 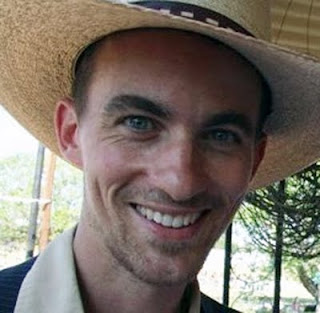 Jason Jay Stevens is a museum exhibit designer and artist based in San Antonio, Texas. He and his wife, Leslie Raymond, have been making award-winning video, and multimedia art installations since 1999 under the moniker Potter-Belmar Labs. At the beginning of this year, they formed Flutter & Wow Museum Projects, joining their unique talents and experience, consulting on, designing and implementing exhibits projects for institutional and private clients.

Jason's essay, "Rationally Entertained: Non-museological foundations of the contemporary science center," appeared in the most recent issue of The Exhibitionist (Spring 2011). He is currently serving on the board of the National Association for Museum Exhibition, and recently completed a three year run on the board of San Antonio's Contemporary Art Month.

What’s your educational background?  Shortly after receiving a degree in writing, I decided to devote myself to an adventurous life in special fabrication. Always and unceasingly curious, for many years I sought jobs working with sculptors, designers, engineers and craftspeople, studying every material and process I could along the way.  Early on, I participated in several museum projects with designer Jeff Bernstein and sculptor Blake Ketchum, but also worked with custom fine furniture makers, puppet makers, and stage designers. I consider this five year period of my life my true 2nd education, however informal.

In 1998, I went to the University of Michigan to study new media art, but after a semester, began working for my professor there, and also joining the staff of the Ann Arbor Hands-On Museum, where I would work for eight years as an Exhibit Designer.  I am indebted to dozens of teachers, formal and otherwise, foremost being John Bowditch, Exhibitions Director at the Hands-On Museum, who with unjustified patience and unrelenting trust provided many opportunities for me. UM Professor of New Media Micheal Rodemer opened my eyes to the possibilities of physical computing and helped me learn that my geek'ness could be cool.

What got you interested in Museums? So many things. For instance, I recall my parents dragging the family around antique fairs every summer, and, you know, it was always like a trip to a big open-air museum where you're permitted to (gently!) touch everything, and spend your allowance on things like baseball cards from before you were born.

For as long as I can remember, I was the kid who was trailing the rest of the group during the museum field trip because I was reading every word of every label and studying every exhibit. I even designed my own museum as a child (it was more of a bubble chart and layout) in addition to all the maps of imaginary places, comic books and original computer games I would program. Somebody like me is very lucky to find themselves working for museums decades later.

How does “tinkering” to create exhibits inform your design process?  I'm in that tinkering stage right now, in the earliest phases of a project that will include eleven pseudo-scientific instruments, including amongst them video and audio components, atmospheric sensors, logic circuitry, electromechanics, and networked synching. Did I mention knobs? Lots of knobs, too. But right now, I'm exploring some new areas of the Max/MSP/Jitter programming environment that will enable some of this machinery to function, and that means a lot of exploring and experimentation, a.k.a. "tinkering." It's a great way to learn.

What are some of your favorite online (or offline!) resources for people interested in finding out more about exhibition development?  I'll give a shout out to print catalogs. Clicking webpages just doesn't compare to flipping bound pages--in function as much as tactility-- for coming across something you never knew existed, and that might even adapt into a solution.  That's the same reason I frequently stroll surplus shops, antique malls, used bookstores and flea markets. Our brains are actually wired to learn and discover very efficiently in the process of wandering, the same as tinkering. It's like compost for the creativity plant!

Tell us a little bit about how your “non-museum” (ie: art) activities inform your exhibit design work?  My partner and wife, Leslie Raymond, and I do artwork by commission and through grants as Potter-Belmar Labs, and client-based museum projects as Flutter & Wow. Our artwork is often site specific, and sometimes participatory, finding clever uses for audio and video and media processing tools. Both enterprises are of the same stone, mutually informing and benefiting, and sometimes causing friction between each other. The people with whom we ultimately share the work is the same in each: everyone.

The artwork benefits from a project management attitude that is critically important in any client-based job. And the kind of intense and immersive creative development that goes into the art is good practice for overcoming limitations and dodging fireballs in design projects.

What advice would you have for fellow museum professionals, especially those from smaller museums, in developing their exhibitions?  There are few fields where disillusion is rarer and where passions are better served than the museum field. When things get frustrating, we all just need to spend a little time in the gallery during open hours, observing and enjoying.

What do you think is the “next frontier” for museums?  There is a lot of innovative and even experimental programming out there, some of it having to do with new media, but more than anything, I think the most intrepid educators and interpretation staff are really combing the beaches for new ways to engage. Social media has helped spur this, but now that every museum tweets and has a thousand "likes" on Facebook, we've become familiar with the media, and are now looking anew at the "social" part of that. It's hardly a new question, "What does it mean for a museum to be a part of a social network?"

I think this is critical, stepping back and taking a historical look. Museums are in part a symptom of the "object-itis" of the wealthy class. Obviously, as those collections were shared, those of us in other classes enjoy the benefit --- one of the few undisputed benefits for tolerating a wealthy class to begin with. As those collections have been handed over to the public trust, the institutions surrounding them carry the burden of justifying broad public support. This loop is closed by programming, and the way I see it, that's the experiment we've been working on for the last hundred years: making sure the museum is indispensable to everyone.
I hope we will see a stepping back from the emphasis on building "family attractions" out of our museums, which is not to disparage real families --- only those cartoon families generated in marketing research reports--but to focus more on the individual --- an admittedly much more wide ranging, ambiguous target. I hope that in the future there will be more well-trained docent and staff activity on the floor, more high schoolers and undergraduates on tightly-focused field trips, more long-term programming for home school groups, alternative visitor-generated audio tours and other layered content, more hosting of meet-ups, lectures, and late night events. And more emphasis on public space.

What are some of your favorite museums or exhibitions?  Oakland Museum is a breath of fresh air. Sadly, I never saw the museum before the renovation, but on the merits of the post-it note community timeline alone--it's like the museum has gone porous. I'm a sucker for alternative curation styles and anti-classical juxtapositions.

I remember the Detroit Institute of Arts hanging art in half a dozen or so galleries--including the shining armor hall--in radical placements eight or ten years ago; I've forgotten who was responsible, but those galleries felt exciting, burgeoning with intimacy. The DIA is doing a lot of exciting interpretative stuff nowadays, too. Paul, you know that place like I do, having grown up with it; overtime I go back, it's like an old friend, and it is always looking better with age!

My list goes on and on. We pay attention to everything the MCA Denver does. And I love the two institutions I consider to be the opposite ends of the great science museum bell curve, Albuquerque's ¡Explora! and the City Museum of St. Louis.

Can you talk a little about some of your current projects?  This spring we somehow managed to have something going on at each of the three big local arts institutions in San Antonio. So, the McNay Art Museum just hosted a retrospective screening of video work that Leslie and I have made over the last twelve years. At Art Pace, we're showing a pair of custom peephole cabinets that display time-lapsed panoramic video scrolls--a pretty major artwork we'd been working on for several years. And the San Antonio Museum of Art has an exhibit we designed for them in which visitors can send text messages and images associated with the concept of peace that get formatted, shuffled and displayed on two giant video monitors in the main gallery.

Right now, we're very much in proposal mode, and the early early "tinkering" phase of a couple of projects.

If money were no object, what would your “dream” exhibit project be?   I'd like to cast a set of giant ceramic upright bells.

For centuries, the Chinese used hand bells to measure the volume of dry goods in the marketplace; there were strict regulations for the making of the bells and particular notes represented particular quantities. I love this overt correspondence between two seemingly disparate things: sound and quantity. So each of my giant bells would correspond to a particular standard volume ("one cubic meter," "one hundred bottles of beer," "boot space in a 1954 VW Beetle"). We can call the exhibit "The Well-Tempered Volume."

Is money really no object? The bells would be mounted on gimbal yokes of solid oak, installed beneath a great pavilion, surrounded by gardens organized in a taxonomic maze, and full of sonorous sculptures activated by wind and water.

Really really no object? I would like to make a second set of these bells and install it in the Antarctic. Wouldn't it be nice to know there is a set of giant upright bells on the bottom of the world?!


Thanks again to Jason for taking some time away from tinkering to share his thoughts with ExhibiTricks readers!