You Want "Free" Museums? Then Show Me The Money! 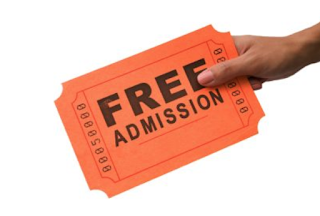 Recently the Metropolitan Museum of Art announced it was changing its entrance fee policies.

And immediately a torrent of outrage and pearl-clutching was unleashed into the Internet echo chamber by museum workers and art critics and culture supporters of all stripes. Basically, the social media grousing was about equally divided between those who said "all museums should be free!" and folks who characterized the people running The Met as heartless philistines (or worse!)

In an ideal world, every museum would be open to all, and not charge any admissions fees.  I am with you there 100%.  But how do we make that happen in a practical, and sustainable, way?

In the real world, somebody (or some entity) pays for free admissions policies --- and that usually boils down to rich people and/or governments giving money to museums. That money almost always has various strings attached, and not every museum has access to the recurring rich people's money and/or government funding to make that happen.

In places where most of the museums are "free" (like Washington D.C. or St. Louis, for example) taxes or voter-approved funding structures pave the way for "free" admission.  Somebody is still paying to keep the museum running, but not through the direct contributions of visitors through the door.

I understand The Met is an easy target for outrage (for lots of reasons beyond admissions policies) but let's looks at some numbers:

• Recent articles indicate that only 17 percent of Met visitors pay the full suggested admission of $25; the average person pays $9.  So let's just set aside the egalitarian notion of "suggested admissions" or "pay what you can" policies.  There are people visiting The Met who can pay more to get in, and choose not to.  If The Met wants to make it harder for rich tourists to cheap out on paying their fair share to see the Museum, I say go for it!  (The real question is how to provide universal museum access for the truly needy, not just thrifty yuppies.)

• How much would it actually cost to make up the "lost" admission revenue at The Met annually if there were no admission charge?  Recent attendance figures at The Met topped 6.7 million visitors.
So if you multiply that by the suggested admission fee of $25 you get a figure of over 167 million dollars annually. More than the 148 million dollars annual budget of the National Endowment of the Arts.  For just one museum! And that doesn't even take into account the Association of Art Museum Directors 2016 report findings that show the actual average cost of serving art museum visitors is closer to $55 per person. So museums are already subsidizing the costs of visitation in most cases.

• Beyond admissions prices and policies, does no-cost museum entry really provide the sort of universal access we would hope for?  Check out this blog post by Colleen Dilenschneider for some data and links regarding that very question. (Spoiler alert: free admission is far from the engagement cure-all that some of its supporters believe it is.)

So while I understand, on an emotional level, the pissed-off people shouting slogans or comparing The Met to Marie Antoinette on the Web, I'm afraid that alone isn't going to change the crappy, unsustainable business models of cultural institutions.

I think our challenges to improve museum access can be both "big picture" (using the example of the funding structure of public libraries as a good starting point for political action and advocacy) and "intensely local" (what is one way we as museum workers can help a local museum to increase its access to all people?)

Those sorts of efforts might not provide the noisy, immediate gratification of social media posts about free admission policies but I think they can create longer-term impacts for both our museums and our communities.

What do you think?  Let us know in the "Comments" section below.