Pass The Flamingo: An Interview with Andrew Coletti 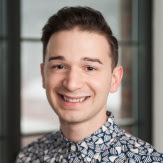 Andrew Coletti is an educator, writer and history / fantasy / food nerd who holds degrees in Classics and Museum Education. He is a full-time educator for the non-profit Salvadori Center. You can also find him teaching about ancient food (and sharing some) at the Brooklyn Brainery, Caveat and other venues around New York City. His food writing has appeared in Eaten magazine and Atlas Obscura and his fantasy novella The Knife’s Daughter is now available from Pink Narcissus Press.

Andrew was kind enough to answer some questions about his work and background in this interview for ExhibiTricks readers.


What’s your educational background?
I have a BA in Classics from Bard College and a Masters in Museum Education from Bank Street College of Education.

What got you interested in Museums?
During college, I got a summer job as an intern in the Education Department of the MFA in Boston. I had never really heard of museum education as a field, so I’m not sure how I found the job posting or what made me decide to apply, but I’m glad I did! That summer I got to develop teacher resources to supplement school programs, and I fell in love with museums and education from there.

What prompted you to start your “Pass the Flamingo” blog?
I’ve always loved the ancient world and over time, I realized that food was a great way of bringing ancient history to life for people. I had been giving lecture-based classes for adults on ancient history at the Brooklyn Brainery for a while when I decided to incorporate some food, using a cookbook of reconstructions I had sitting on my bookshelf but had never really used. I made Mesopotamian beer for people to sample at my Mesopotamia class and later hosted a Roman dinner party at home using recipes from the same book.

I had been steadily gaining an interest in cooking around the same time, so I was really excited to have found a way to combine my interests. Soon I was giving classes at the Brainery specifically on ancient food, with a menu of samples. The blog developed out of those classes. Since then, I’ve gotten to present about ancient food at museums and educational venues outside the Brainery and publish my food writing outside of my blog.

Tell us a little bit about how your background informs your work?
One of my college professors used to joke that majoring in Classics is like majoring in everything. You get a little bit each of history, language, art history, philosophy, etc. and you learn to be a good writer, which is a skill you can apply anywhere. I try to take some of that well-roundedness that I was encouraged to cultivate in college into the work I do.Because I didn’t study education until grad school, my approach to teaching and curriculum development is very influenced by Bank Street’s philosophy. I’m big into hands-on experiential learning with multiple sensory levels, and that has informed my approach to ancient history as well, such as the food blog and classes.

What are some of your favorite online (or offline!) resources for people interested in finding out more about the latest thinking on ancient history? • All Mesopotamia (Find them at Facebook or allmesopotamia.wordpress.com): They post really cool and informative articles that take a deeper dive into Mesopotamian culture and history.

• Colleen Darnell (@vintage_egyptologist on Instagram): A professor of Egyptology at Yale who also happens to be obsessed with vintage fashion. She posts interesting snippets of Ancient Egyptian history and literature with images of herself in fabulous 1920s garb.


What advice would you have for fellow cultural workers and educators, especially those from smaller institutions, in bringing an appreciation of ancient history into their work?
Be flexible and embrace new interpretations of old material, and don’t be afraid to introduce a historical parallel or connection where it might not be expected. You’d be surprised the number of connections you can make between ancient and modern people’s lives, especially when you look at common human experiences (like food, love/sex, and death).

When I teach my ancient food classes, the most important thing I want people to take away from the experience is that ancient people really weren’t that different from us. If you can believe that, it’s easier to see how it can be relevant to your own life, which is the biggest hurdle people have to overcome to get interested in or excited about the ancient world: what does it have to do with me?

What do you think is the “next frontier” for museums?I feel like I am seeing museums increasingly reinvent themselves and restructure their way of presenting their collections, although some institutions are ahead of others in this regard. I think it will need to happen to a greater extent for museums to stay relevant and inspire new generations of people to care about their collections.

What are some of your favorite museums or exhibitions?I recently got to visit the Museum of Childhood in London. It’s a really fun and different take on a children’s museum, with displays that trace the evolution of children’s toys and games over the centuries.In the US, I love the Mesopotamian galleries at the Morgan Library & Museum and the Penn Museum museum in Philadelphia. NYU’s Institute for the Study of the Ancient World on the Upper East Side often has cool temporary exhibitions.

Can you talk a little about your book?Sure! My novella The Knife’s Daughter will be available July 10th from Pink Narcissus Press. You could say it’s loosely related to my love of food and ancient history (food comes up quite a lot and it’s set in a world inspired by ancient Korea). It’s meant as a subversion of familiar fairytale tropes, including the prince who goes on a quest; in this case, the hero is a prince who was born female but raised to consider themselves male. It’s written in the second person so that the hero is just referred to as “you.” 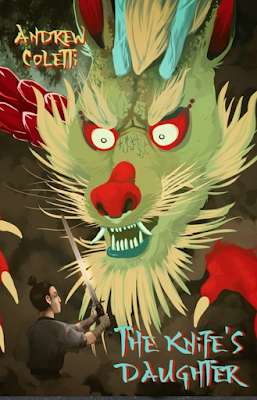 If money were no object, what would your “dream” museum project be?
I would like to stage a production of my college senior project (a one-act comedy in which I performed in drag as the Mesopotamian goddess Inanna), in the Ancient Near Eastern galleries at the Met.

Thanks for sharing your thoughts with ExhibiTricks readers, Andrew! Find out more about Andrew's work through his ancient food blog at www.passtheflamingo.com or @passtheflamingo on Instagram and Twitter.


AND NOW THE FREE BOOK GIVEAWAY!  We will be giving away two FREE copies of Andrew's new book, The Knife's Daughter to two lucky ExhibiTricks readers!  Here's what you need to do to win --- if you are not yet a subscriber to the ExhibiTricks blog, just click on the link at the very top right of this page and subscribe via email or your favorite newsreader app.  If you are already a subscriber to the ExhibiTricks blog, just send me an email and put "I want to win a copy of Andrew's new book!" in the subject line.

In either case, you must enter by July 27, 2018 to be eligible to win. One new subscriber and one existing subscriber email will be chosen at random to receive one copy of The Knife's Daughter. GOOD LUCK!