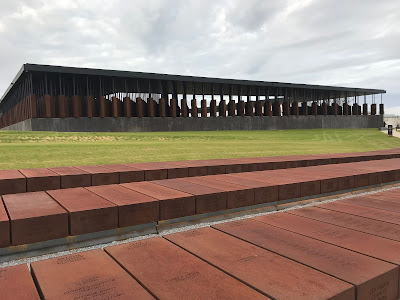 Last week I visited Montgomery Alabama for the first time.

I was there as a member of The Museum Group (TMG)  as we held our fall 2018 business meetings there.

As part of our experiences in Montgomery, TMG was fortunate to visit three important cultural institutions, the Civil Rights Memorial Center, associated with the Southern Poverty Law Center (SPLC) and two more recently opened sites associated with the Equal Justice Initiative (EJI), The National Memorial for Peace and Justice, and The Legacy Museum.

Visiting those three places still has me thinking about the difficult histories in the United States involving race, slavery, discrimination, and justice, so I wanted to share my experiences and still-evolving impressions here.

The Civil Rights Memorial Center is a modest space associated with the Southern Poverty Law Center, a group dedicated to fighting hate and bigotry and to seeking justice for the most vulnerable members of our society.  The Memorial Center itself is associated with Maya Lin's monument to commemorate people who were killed during the civil rights movement (pictured below.) 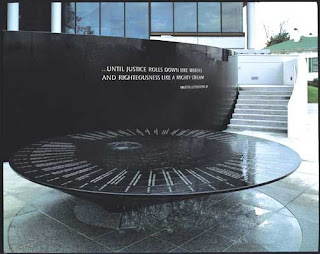 While many people think of the U.S. Civil Rights Movement as something from the past, it is clear that SPLC's message in the Memorial Center is that the work of fighting hate and bigotry continues to this day and involves every one of us.

To that end, the exhibits and experiences inside the Memorial Center not only share information about the people featured on Lin's monumental sculpture outside but also present modern stories and images such as those of Heather Heyer, the young woman killed during the Charlottesville protests. The information here is sobering and thought-provoking. 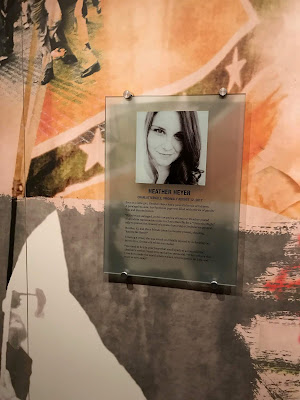 The final experience inside SPLC's Memorial Center is a large Wall of Tolerance, an interactive video wall that lets you insert your own name as a record of visitors who have pledged to take a stand against hate, injustice, and intolerance.

I found that adding my own name was a hopeful, and purposeful, way to conclude my experiences at the Civil Rights Memorial Center. 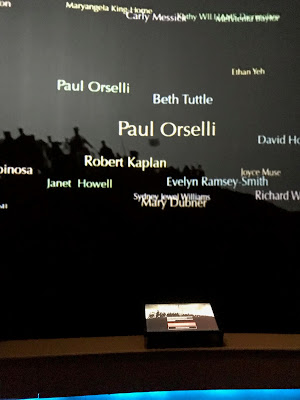 THE NATIONAL MEMORIAL FOR PEACE AND JUSTICE

The Memorial is a six-acre outdoor site that forces visitors to confront the ugly legacy of racial terror lynchings in the United States between 1877 and 1950.  Hundreds of six-foot-tall metal boxes formed of Corten steel produces a rusted, weathered surface that evoked images of blood (and wear) in my mind.

The experience is a deliberately narrative one that leads you on a winding path through the six acres of the Memorial.  The experience starts with a statue of enslaved people bound in chains, perhaps at a slave auction.  This powerful image is followed by a winding pathway lined with benches as well as signs on the interior of the walls surrounding the site that provide both historical context and evocative quotes.  The design of the entire space acknowledges the need to occasionally stop to rest and process. 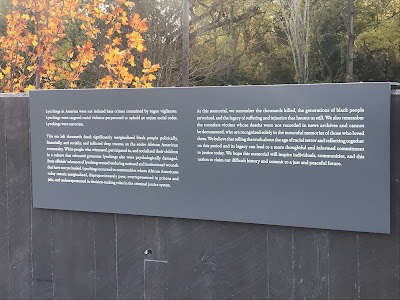 As you move closer to the sets of human-sized boxes, they are resting on the ground so that you can read the names of counties across the United States where documented lynchings occurred and the names and dates of the people killed in those places. The sheer number of names and boxes is daunting. 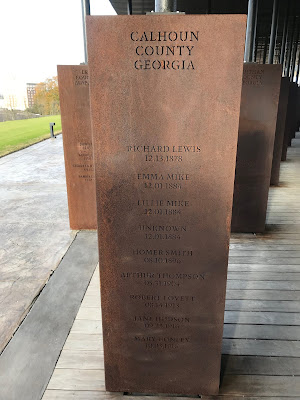 As one moves through the memorial, different sets of boxes from all the different counties continue to lift off the ground until the final set you encounter is hanging above you, evocative of lynched bodies, with the names and information punched into each box now nearly impossible to read. 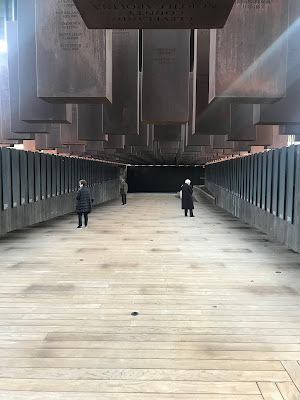 The overall effect of the Memorial, for me at least, was strangely quiet and contemplative despite the histories represented there.

The encounter with the hanging memorial elements ends in an area where duplicate copies of each box are placed lying down in long horizontal rows.  (Pictured at the top of this post.)  My understanding is that the Equal Justice Initiative wants to offer each of those duplicate boxes to every individual county so that appropriate memorials can be constructed at the sites of past racial terror lynchings using the corten steel boxes that originated in Montgomery.

The message I took away from the Memorial was one of truth and reconciliation, and the acknowledgment that we as citizens of the United States will never truly reconcile with our difficult histories unless we face the truths of our collective past.

Visitors are not allowed to take pictures inside EJI's Legacy Museum, so I will just share a few high-level thoughts about my experiences. The Legacy Museum clearly stands in association with The National Memorial for Peace and Justice but focuses more on the current social justice work of the Equal Justice Initiative, and the idea that slavery did not "end" in the United States but merely "evolved."

The emotional experiences of The Legacy Museum start immediately as you are informed that you are standing at the site of a former slave "warehouse" where enslaved people were held before they were bought and sold at auction.  Just steps away from the entry desk, video presentations are illustrating the pain of family separation of enslaved people and the pivotal role that Montgomery played in the slave trade.

As you move further into the Museum, dense text displays were interspersed by compelling short video presentations (I was especially taken by those featuring the illustration and animation work of artist Molly Crabapple) effectively illustrating the modern concerns of the Equal Justice Initiative --ending mass incarceration and excessive punishment in the United States, to challenging racial and economic injustice, and to protecting basic human rights for the most vulnerable people in American society.

As with the two other Montgomery sites, my experiences inside The Legacy Museum were quiet, yet compelling.

I found it interesting that two social justice organizations deliberately chose the approaches of museums and memorials to amplify their messages.  Ironically, given the difficult histories that each of the sites shares, I have no doubt that, especially after the relatively recent openings of The Legacy Museum and The National Memorial for Peace and Justice, that many more people will visit Montgomery.  Based on my own experiences, I would certainly recommend a visit to Montgomery to anyone.

As a side note, I couldn't help but notice the guards and metal detectors at the entrance of each site, and we were informed that both EJI and SPLC require security around their buildings and facilities 24/7.  Clearly, not everyone in and around Montgomery is happy to be reminded of the histories shown inside these important institutions.

Despite this, I can't help but be both hopeful and humbled by the work these institutions and their sponsoring organizations do every day.  On the last day of The Museum Group meetings, we were honored to have Bryan Stevenson, one of the co-founders of the Equal Justice Initiative, speak with us. I couldn't help be struck by his grace and purpose. One thing he said that I continue to think about is:


Please visit the websites of the Southern Poverty Law Center and the Equal Justice Initiative to learn more about these organizations and how you can support their important work. 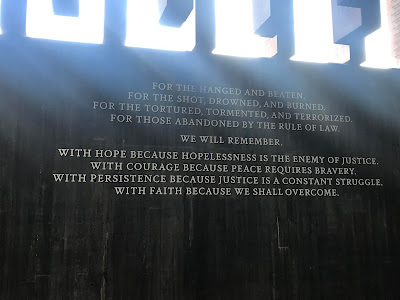